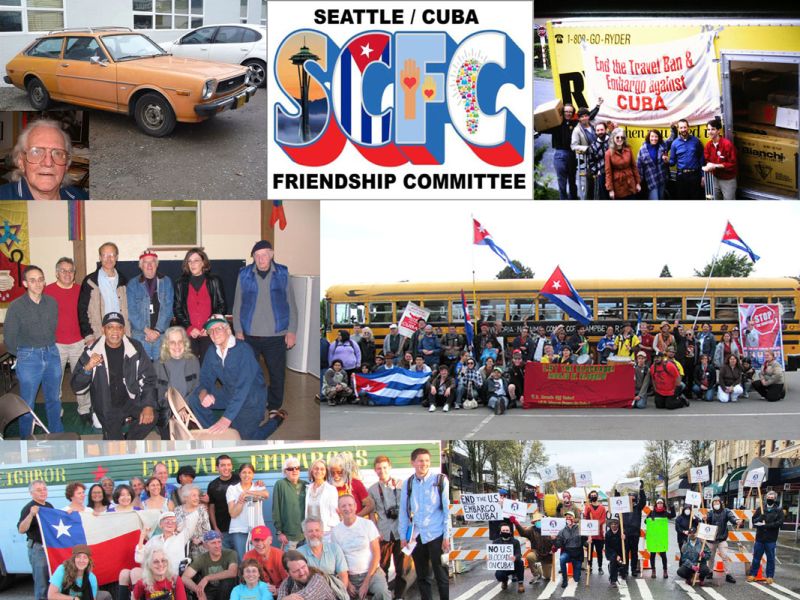 On November 6, 1992, a group of Seattle solidarity activists gathered at Seattle's University Baptist Church to send off donated medical and school supplies to Cuba. Long-time Cuba supporter Tom Warner loaned his Toyota Corolla for the trip to the Mexico with the first IFCO/Pastors for Peace Friendshipment Caravan to Cuba (I was there and donated medical rehabilitation equipment). The caravan crossed the border into Mexico and the supplies were carried to Cuba on a boat, eventually arriving at the Martin Luther King, Jr. Memorial Center in Havana. After Tom’s Toyota successfully returned to Seattle, we held an organizing meeting, and thus began the Seattle/Cuba Friendship Committee.

In the thirty years since, our committee has remained faithful to the Cuban Revolution and tried to help the Cuban people weather the storm of the brutal U.S. government economic blockade, now in its 62nd year. We’ve sent dozens of caravanistas, tons of medical and school supplies and a schoolbus on the IFCO Caravans, supported volunteers to Venceremos Brigades, sponsored visits by Cuban diplomats and artists to Seattle, rallied for the Cuban 5, hosted the Cuban diplomatic delegation to the 1999 Seattle WTO Ministerial meeting, and held countless demonstrations in support of the Cuban Revolution and to demand an end to the blockade. What will it take to end the blockade and establish normalized relations between our governments? The answer is not yet clear, but our committee will stand with the Cuban people so long as it takes. Viva Cuba, Cuba Si!