The Cuban Ministry of Public Health (MINSAP) has long been considered one of the diamonds of the Cuban Revolution, helping Cuba to achieve excellent national health outcomes by focusing on preventive, community-oriented healthcare delivery. In 1992, MINSAP established INFOMED, a project to establish a nationwide computerized medical information network. This was a response to the difficulty of producing and sharing paper healthcare documents, and also a future-looking initiative to promote health information sharing.

This year's IFCO/Pastors for Peace Friendshipment Caravan focused on delivering donated computers to INFOMED, to be used as communication terminals.

In early 1996 we in the Seattle/Cuba Friendship Committee enthusiastically embraced this project. We collected 22 donated desktop computers with monitors, confirmed their operability, packed them securely for shipment, and sent them on the Friendshipment Caravan. 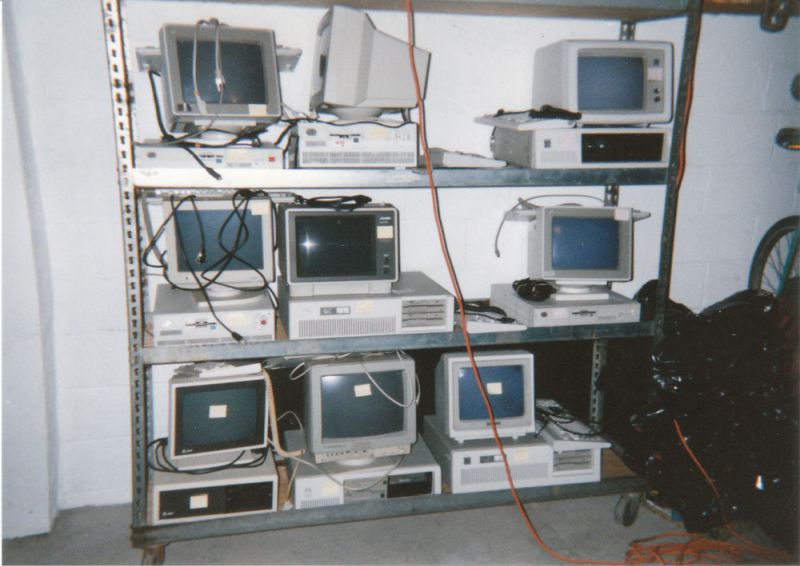 Ed Mays and Roger Lippman work on computers to be delivered to Cuba. 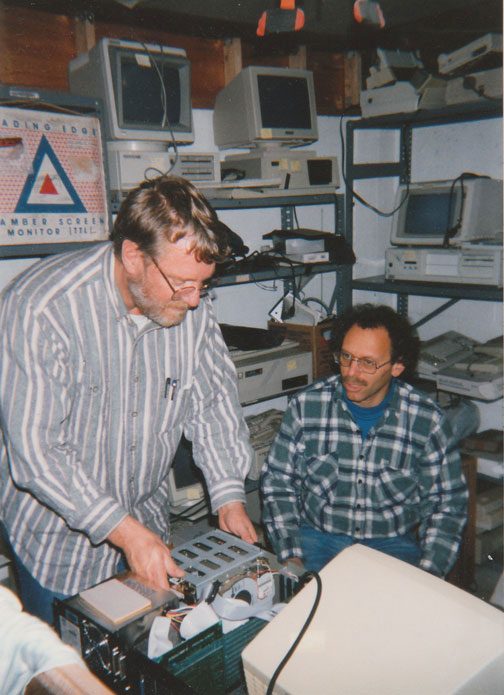 The Seattle/Cuba Friendship Committee co-sponsored with our friends Vancouver Communities in Solidarity with Cuba a public event at the Blaine border crossing of the US/Canada border. We went north to support Canadian Caravan participants who brought computers into the U.S. with the stated intention of carrying the computers to Cuba, in defiance of the U.S. Embargo of Cuba which prohibits such acts. 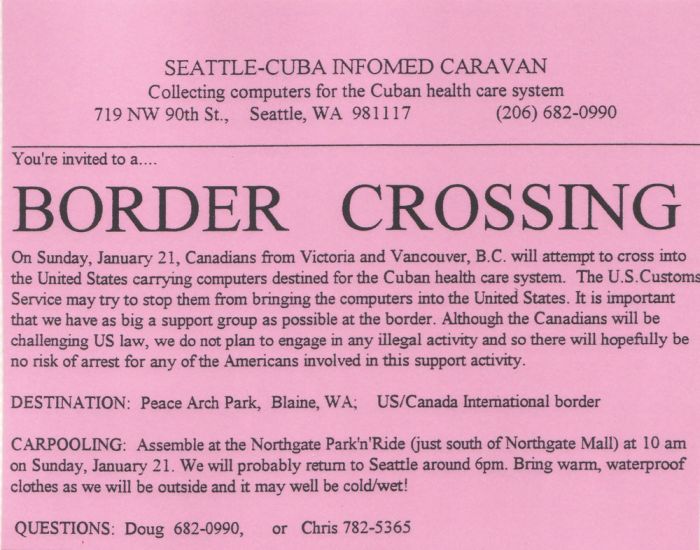 On January 31 the U.S. Customs Service stopped the Caravan at the US/Mexico border crossing in San Diego, and the approx. 400 computers were seized by the U.S. Treasury Department which enforces the Cuban blockade (they call it an embargo). In response, members of the Caravan began a "Fast for Life" which they continued for 32 days in San Diego, then moved it to Washington, D.C., across from the U.S. Capitol.
In February, IFCO/Pastors for Peace staged a second attempt to carry computers across the border in San Diego. Two members from Seattle joined this effort and we flew to San Diego with additional computers to carry across the border. This border-crossing attempt was also unsuccessful, but it did bring additional national publicity to the issue of the US government blocking the delivery of important life-saving technology to the Cuban healthcare system. 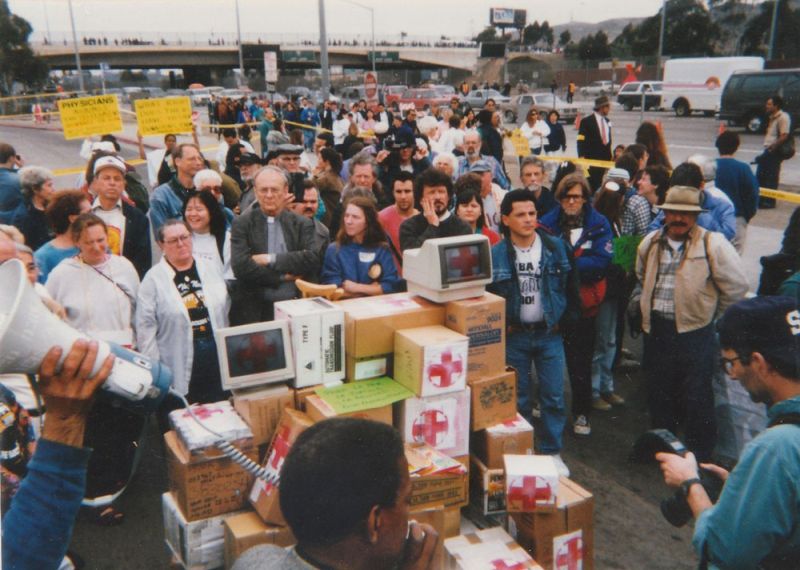 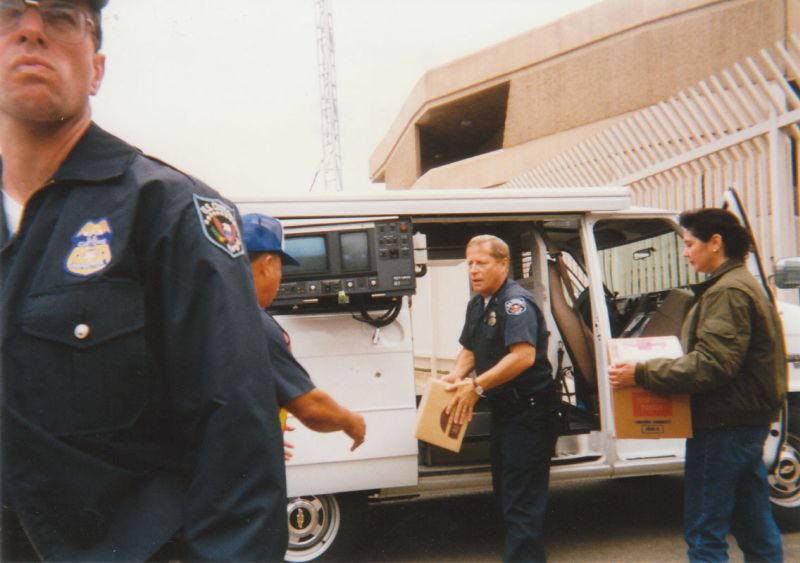 There was also a rally by right-wing Cuban-Americans, reportedly members of Alpha 66 (a noted terrorist organization), at the standoff. They were kept separated from the IFCO/Pastors for Peace Caravan by horse-mounted San Diego Police officers. 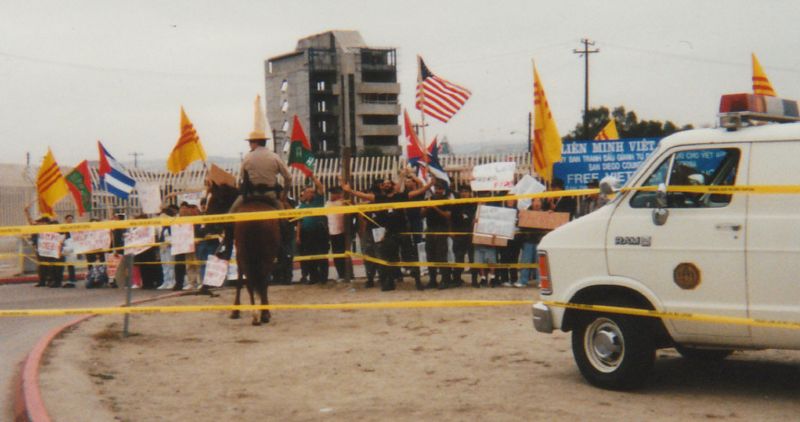 Over time, international pressure grew on the U.S. Government to release the computers, and finally on Day 94 of the "Fast for Life" the computers were released and delivered to Cuba.