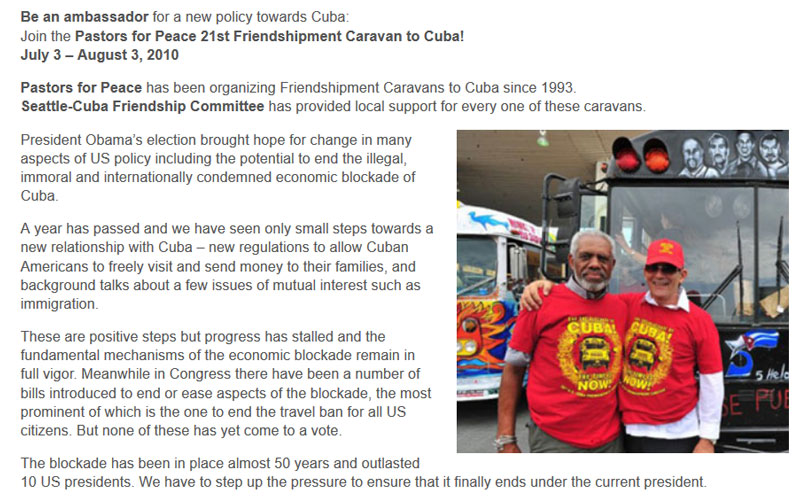 21st Friendshipment Caravan begins in the Pacific Northwest
*Canadian activists defy US embargo of Cuba*
On Sunday July 4, Canadian activists successfully challenged the US Government blockade against Cuba by crossing the Canadian-US border carrying dozens of boxes of aid aboard a yellow school bus.
Before the border crossing, participants met at Peace Arch Park, which straddles the US/Canadian border near Blaine, Washington. Canadians from the greater Vancouver area and nearby Saltspring Island were joined by Americans from Bellingham, Seattle, Olympia and New York City. The approximately 100 participants began with a rally at the picnic area on the Canadian side of the border.
Tom Warner, a Seattle activist who has been vocally supporting the Cuban Revolution for 50 years, gave a pep talk while Tamara Hansen of Vancouver, chief organizer of the event, looked on.
This young Canadian man appeared very happy to be going on the caravan!
A Canadian First Nations woman provided a blessing song to caravan participants.
Every rally needs music and dancing: the Samba du Soliel band from Salt Spring Island, British Columbia, belted out happy rhythms to energize the gathering.
...and (almost) everybody danced!
After the rally, volunteers loaded donations of material aid onto a yellow Canadian schoolbus that will be traveling to Cuba on the Friendship Caravan.
The bus passed near the Peace Arch monument.
Manolo de los Santos spoke with US Border Patrol officers regarding the aid being brought into the United States.
Canadian caravanistas who will be accompanying the bus to Cuba walk towards the US border control building.

Canadian "caravanistas" who will travel on the caravan across the US and Mexico introduced themselves. 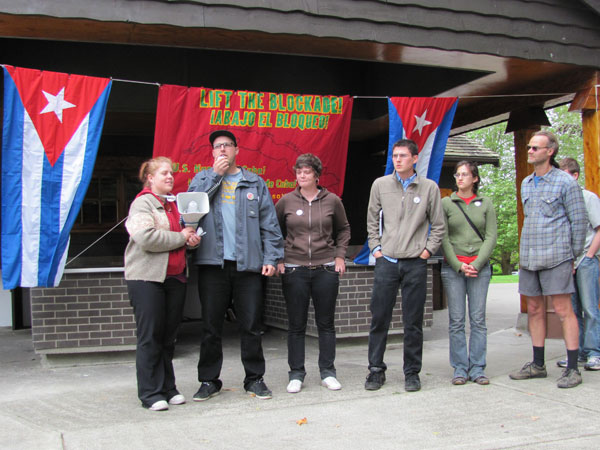 Hap Bockelie from Seattle will be one of the Americans going on the caravan. 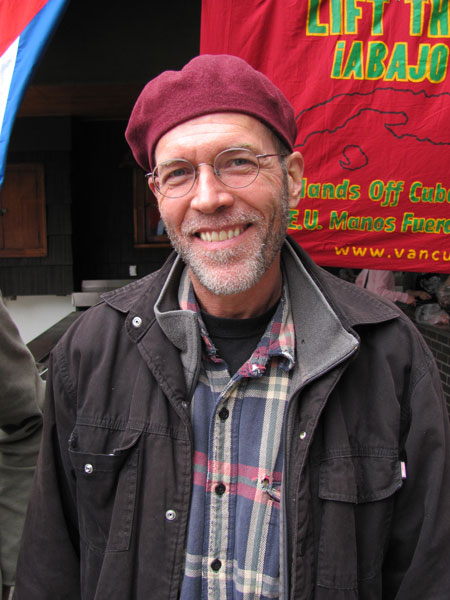 The schoolbus got in the traffic queue near the Peace Arch and headed towards the US border crossing, while the support group followed on foot through the Peace Arch Park. 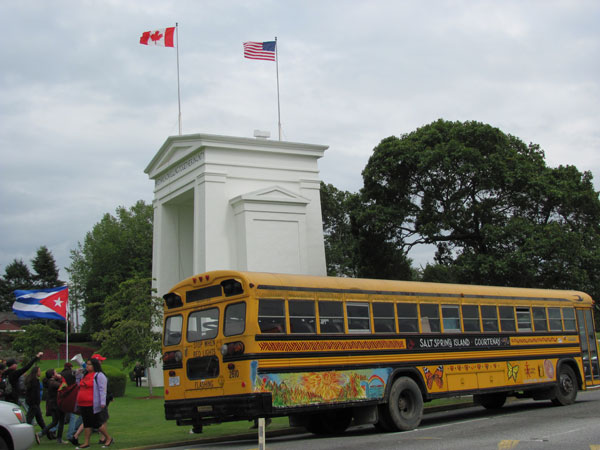 Seattle/Cuba Friendship Committee Secretary Tom Warner, a Seattle activist who has been vocally supporting the Cuban Revolution for 50 years, and his wife & caravan organizer Judy Zeh. 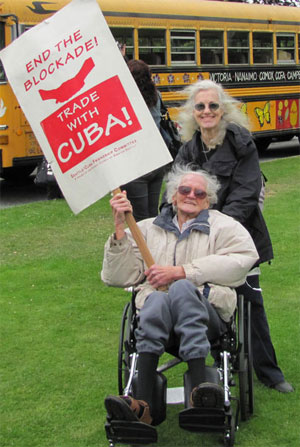 Success! The bus and caravanistas having successfully crossed into the United States, the participants gathered for a group portrait. 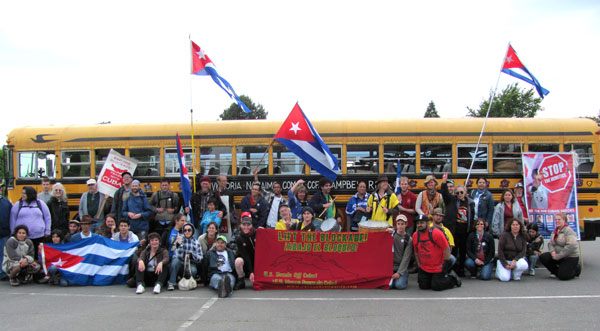 Representatives from the Seattle/Cuba Friendship Committee at the rally. 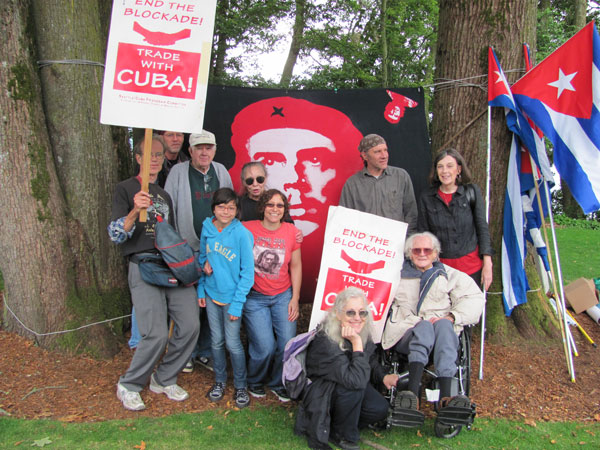 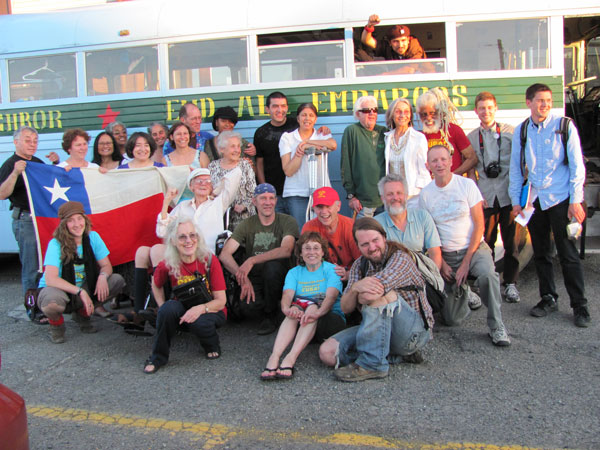 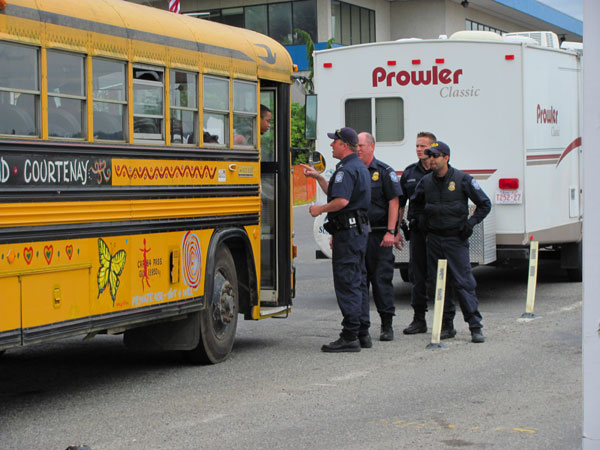 Pastors for Peace staffer Manolo de los Santos (left) and Canadian activist Axel (right), who will be driving the schoolbus across the US and Mexico, prepared to drive through the US border crossing. 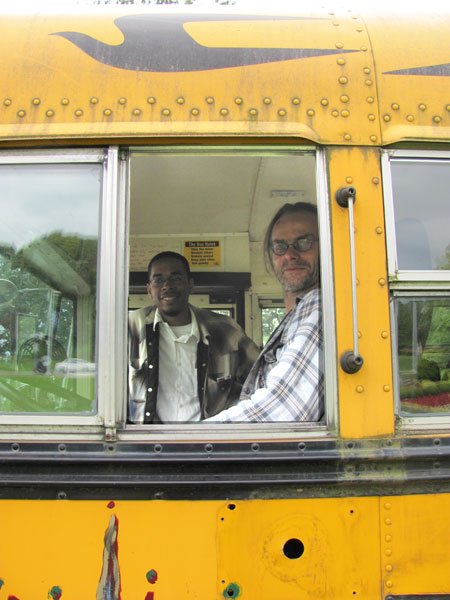 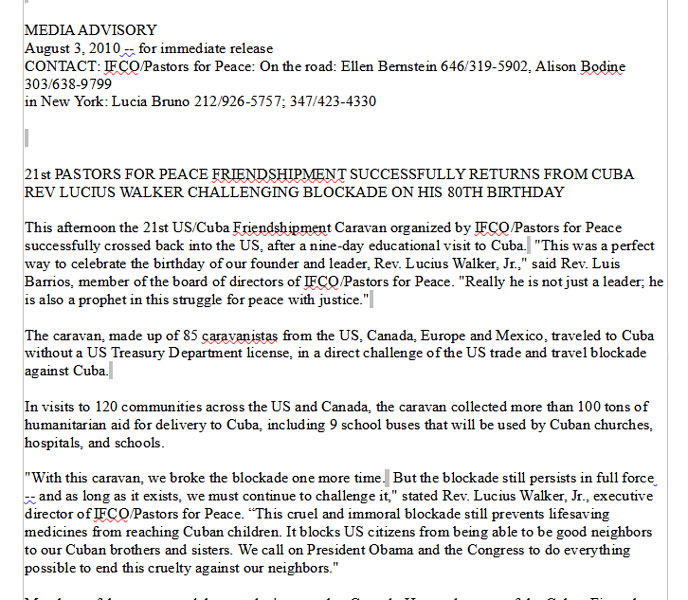 The Rev. Lucius Walker, founder and executive director of the Interreligious Foundation for Community Organization (IFCO) and who as the founder of Pastors for Peace led 21 U.S.-Cuba Friendship Caravans to Cuba defying the embargo, died Tuesday. He was 80.
Many members of the Seattle/Cuba Friendship Committee knew and worked with the Rev. Walker, and he will be sorely missed. 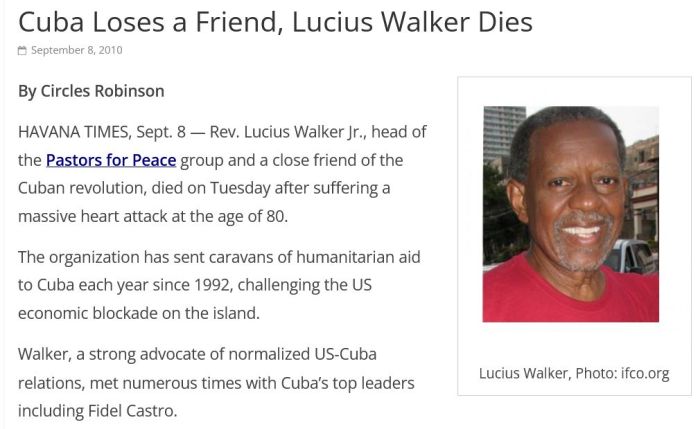 Alejandro Ramon Bernal is Washington State's first medical student at the Latin American School of Medicine (Escuela Latinoamericana de Medicina [ELAM]). He left Seattle for Cuba in 2007 and is currently in his fourth year of medical school. He regularly sends personal reports of his impressions and progress in Cuba. 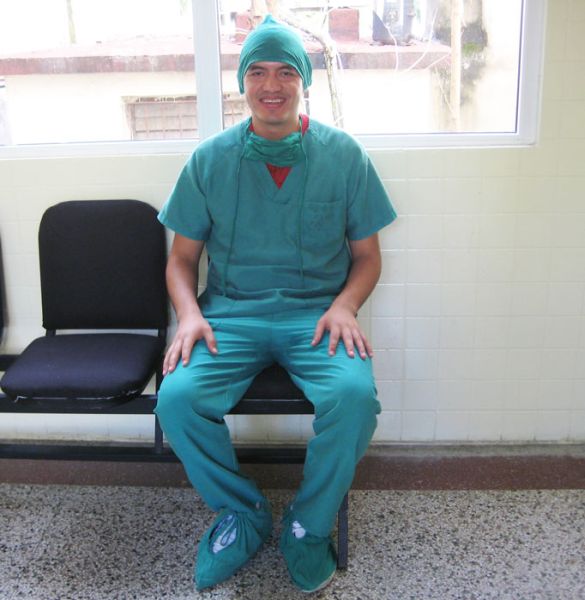 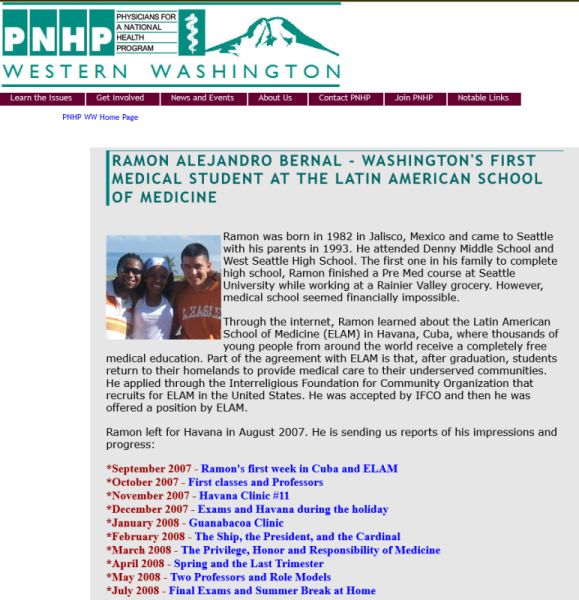